My First Attempts at Slip Casting 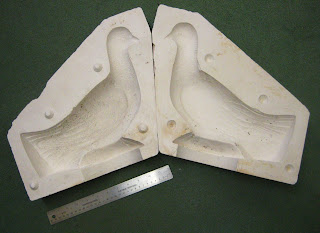 Soon after Christmas (when my dissertation was safely handed in) I bought a second hand plaster slip mould of a pigeon for £4. I took it in to the university ceramics technican and he gave me a crash course in slip casting (although he did wonder whether it was rather a large mould to start with considering my zero knowledge on the subject). It is quite large (that's a 12 inch ruler in the picture) and very heavy (special thanks to my sister in law, Helen, for collecting it from the seller for me) . 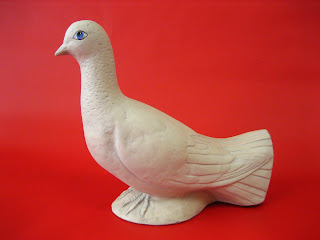 When my first attempt came out of the kiln OK I coloured her dove grey and gave her human eyes.
I had a very clear idea of what I wanted to try and do with the pigeon after reading lots of fairy tales for my dissertation, where humans are turned into birds.  I had attended a mould making workshop a while ago, so I set about trying to make a plaster mould of a doll's head. I cast another pigeon and cut her head off and replaced it with a cast of the doll head. 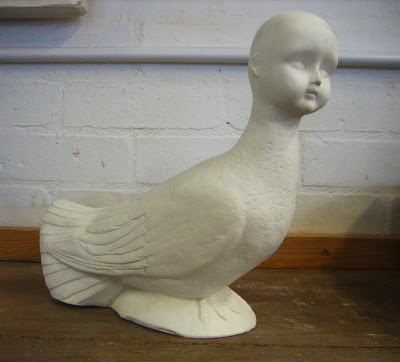 I was really encouraged by the results and tried it again but with a different doll head. This is the point at which my beginner's luck ran out. The second head was heavier than the first and the pigeon body started to collapse. I had to sacrifice her perch and feet so I could salvage the rest. Once she was fired I decided to make her some ceramic and wood wheels to get around on. I think I like her even more than the first one now. 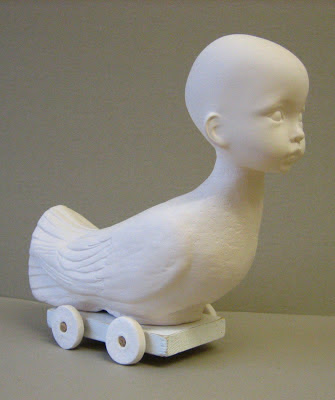 This description makes it sound like it was all quite quick and simple but in fact these pieces were created over a period of several weeks. Now I just can't decide whether or not to colour these latest bird/girl hybrids or keep them white. And should I carry on and make a flock?